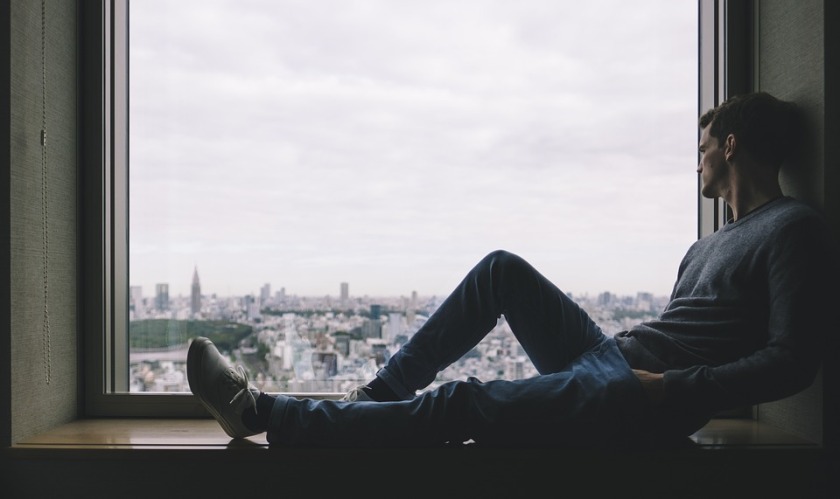 He pushed the pencil to the end of the desk, making a clear path in the grit that covered it. I need to clean this s*** he thought.

He returned to the pad of paper sitting in front of him:

She was like a soft summer rain. Beautiful in every way. Her laugh could brighten my day. We would sit by the fire, swapping stories like we did as kids, her arms tangled in mine.

Tahir could hear those familiar footsteps trotting down the hall at full speed. He quickly whipped open the drawer by his right knee and threw the pad of paper into it, slamming it shut just before the footsteps reached the door.

“Tahir! What’s up, man?” Derek said as he peeked around the corner of the office door. He pushed his wiry frame against the doorway, leaning in like a curious dog, tail wagging and everything.

“Uh, not much. Just trying to write my short story for this week’s column.”

“Oh, come on. You know that’s not what I’m talking about.”

“I really don’t know what you mean, Derek.”

“The cutie at the front desk with the brown eyes, what you wrote about last night on your blog.”

“Ah, yeah, that one. Um, it was a story Derek. We never really talked at all.” Tahir said.

Tahir remembered her as he walked into the office this morning. She was a beauty, and he was in love. She had short black hair that hung straight, framing her caramel colored skin. Her eyes were like uneaten chocolate candies sitting on white porcelain plates, fringed with long dark eyelashes that curled to meet her thin brows. Her lips. Her lips is what took his breath away. They were a plush, soft baby pink that when it crept into a smile, they looked supernatural in beauty. The peach silk dress she wore flowed over her body like water, highlighting every curve with vigor.

She was beautiful in every way.

Derek interrupted Tahir’s thoughts, “What? So she’s up for grabs? Dude, I call dibs now.”

“Unless you want me to tell her you like her.”

Tahir sighed, “Don’t just…I got a lot of work to do, Derek. Send in Julia, I need to speak with her.”

Derek huffed, “Fine. But if she says no to you, she’s all mine.”

Geez, he’s annoying. It’s not a competition…but if he asks her first, I’m gonna punch his smug little smile right off of his boney face.

“Tahir, you asked for me?” Julia stood in the doorway, gripping a stuffed manila envelope.

She wasn’t anything that beheld much beauty. Her skin was pale, making her gawky in appearance. She had dull hair the shade of a fat-free chocolate and dark beady eyes hidden beneath large purple frames. Her cheeks had a rosy glow, but would be considered too pudgy by any fashion magazine. Her sweater was a bright pink that covered her overused, grey muscle shirt. Her muffin top was highlighted by the flowing khaki’s she wore almost every day, but she was so used to sucking it in, no one could barely notice anymore.

“Ah, Julia, yes. I wanted to ask you how your trip to Ireland was.”

“Oh” Julia hesitated to answer, surprised Tahir remembered, “It was good! I had a lot of fun. It was really beautiful there with the green and rolling hills. I would recommend it the next time you feel like traveling.”

“Awesome, sounds like you had a great time. We’re glad to have you back.”

A moment of silence followed, Julia fiddled with the corner of the envelope she was holding while Tahir stared at his empty screen.

“Tahir…I…um…was wondering. Did you…um…want to go…” Before Julia could finish her sentence, Derek flew into the doorway like a hawk and shrieked,

“Dude! Do you know that gorgeous, blonde receptionist you like?

“What about it?” Tahir asked.

“I asked her on a date, and she said yes. Boo yah!” Derek said as he sprinted down the hall towards his office.

“WHAT THE F*** DEREK! Geez, what a prick. I even told him that I really liked that girl. She was the prettiest I had ever seen.” Tahir looked to his window. “I’m never going to find another girl that that.”

“Yeah. Sure. I guess there’s not enough pretty girls to go around.” Julia said.

“What is that supposed to mean?” Tahir said, surprised at the lack of emotion in Julia’s usually peppy voice.

“Nothing,” Julia took two hard steps forward and tossed the envelope she was holding in her hands. It landed heavily on his desk with a thud, sending dust flying up into the air. Before he could get out another word, Julia was gone.

Tahir immediately stood up and lurched for the door. He grabbed the frame of the doorway and used it to gain momentum towards her office. He counted three doors before forcefully turning the knob on the fourth and pushing it open.

Julia sat at her desk, she didn’t even look up when he came in.

“Julia, listen. I didn’t mean to say that you’re not, you know, pretty. I mean…”

“Seriously. You think I’m shallow enough to be upset that you don’t think I’m pretty?”

“Tahir, I like you.” Julia’s eyes looked straight into his soul as those words spilled from her thin lips.

“I’ve always liked you, Tahir. You’re smart, creative, and kind. I help you with drafts, grammar, spelling, and copying. I go out of my way to help you because I know that you would do the same for me. I like the way the one piece of hair always sticks up on the top of your head, no matter how much hair gel you put in it. I like the way you use your words to describe beautiful people and the love you hope to find. I like the way your awkwardly laugh whenever you’re with people you’re not too familiar with and so much more,” Julia sighed,

“But your view of love is as clear as dust.”

Tahir was stunned. His jaw nearly hit the floor.

“Julia…why didn’t you tell me?”

She paused her typing and moved her hands to her lap, spinning slightly in her chair to reveal her eyes glossy with tears.

“Because. I will never look like them or be like them, Tahir, the girls you always seem to write about. I hate thunderstorms, I can’t stand the bugs outside. I wear clothes for comfort. I’m not skinny. My hair doesn’t effortlessly flow down my back. I don’t wear glasses for fun, I wear them to see things. Dresses make me uncomfortable, and I would rather sleep 30 more minutes than put on a full face of make-up.” She paused and looked down at her hands in her lap.

“Plus, we aren’t supposed to talk about this kind of thing. If we like someone we have to keep it hidden like buried treasure. Because no one wants to take the chance. No one wants to get hurt. Please, just go away, Tahir. I’m already embarrassed enough as it is.”

Tahir slowly backed up to the hallway and could barely feel his legs propelling him forward on his way back to his office. When Tahir got back to his desk. He sat there in some sort of trance. Here he was, thinking he was unlovable only to be loved by the last person he would expect it from.

He picked up the pencil on the edge of his desk and pulled his notepad out of his drawer. He looked at what he wrote earlier. Within seconds he ripped it from the bind, crumpled it up, and pushed the dust filling his desk to the side with it.

Then, he began to write:

Title: The things we never say to each other

“I like you” she said, her glistening brown eyes looking up at me…

3 thoughts on “The Things We Aren’t Supposed to Talk About: Act II”