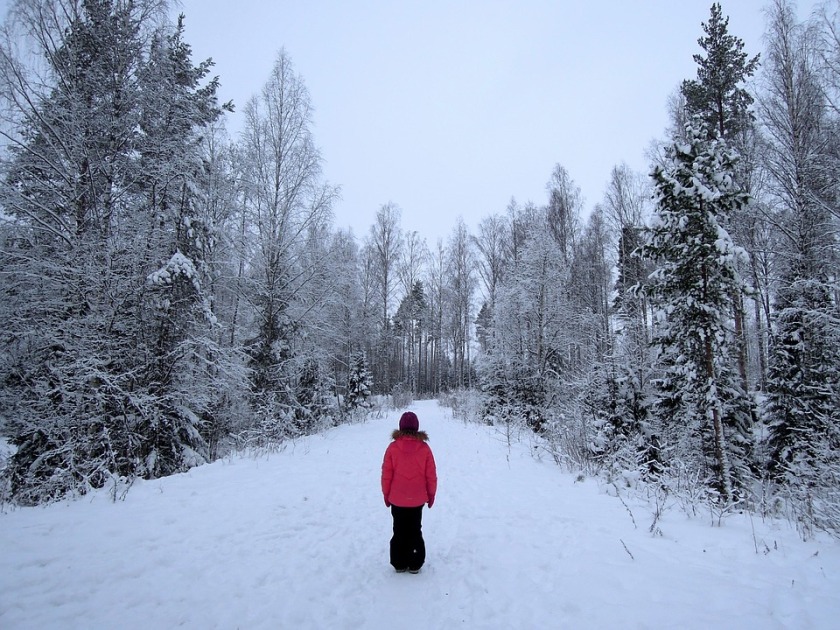 The soft crunch of the snow beneath my worn-out boots filled the quiet morning street with life. I watched snow flick off the tip of my boots as I marched across a sea of white. I exhaled and my breath became one with the cold in a burst of fog before thinning into nothing. But before long, my puffs of air disappeared altogether as the warmth of my inner pith faded.

I reached the lone stop sign near what I believed to be the end of the street and I climbed up on the snow drift beside it. Even though I knew fully well that not a single car would cross my path. I planted my feet into the solid ice shell covering the last snowfall and began my long wait.

To keep warm I kept my limbs moving and practiced my greeting.

“Good morning! How ya doing…no, to easy” I muttered.

But my practice was cut short as the trudging and scraping of familiar boots interrupted my thoughts.

“Hey…” before I could get another word out, he exclaimed, “Why the heck are you standing in the drift? Your feet are gonna be soaked ya know. Geez, your always such goodie-two-shoes, just get on the street.”

He motioned for me to stand next to him on the lightly frosted street, but I just looked down at the snow that was up to my knees. To be honest, my feet didn’t feel cold at all. They were safely cocooned beneath me and I felt no reason to move.

“Suit yourself…” He scoffed.

As we waited in silence, him attending to his precious Tamagotchi, I gently removed my hat from the perspiring crown of my head and nestled it in the canopy of my jacket. The cool air brushed through my hair and whisked it about my head. The fluttering strands danced along with the breeze keeping my mind occupied on pushing it away from my eyes until the bus arrived.

Right on time, as usual, the bright yellow bus appeared in the distance. Shining in dew, it roared to a stop in front of us. I shuffled out of the drift and climbed on. When it took off, I watched the world pass in a white blur until we arrived at school.

The classroom felt the same as it had always felt, a cold and empty space where others seemed to flourish and I fell short. They would fervently raise their hands whenever a question was asked. They would zip through math problems and scurry about in gym. I guess you could say I didn’t have enough energy to keep up.

Even in music class I couldn’t keep up with the beat of the song. I would move my lips to the songs, but never actually make any sound. I was as quiet as the morning snow, but down to the very roots of my being I was trying my best.

I worked harder than most of the students, focusing on how to best adapt my weaknesses. I was the bud that never blossomed at the right moment. Not at the same time when all the other students were being nurtured and cared for. When I finally understood something, it was a long past thought to the others and my accomplishments were flat lined by their taunting blades.

But on this particular day, something amazing happened. Not just any normal kind of amazing like when a child takes its first steps, or when someone catches a Hail Mary in a football game. No, it was more than that.

It was during a typical third grade English lesson discussing the basics of figurative language. My teacher asked us all to write a simile, using the words “like” or “as”. I watched as all the other students scribbled out one idea to the next. They shouted them to friends across the room in excitement proclaiming their brilliance. The car was as fast as a cheetah, the man was as tall as a skyscraper, and the train roared like a lion to name a few.

I sat there puzzled for a few moments. All of those ideas sounded perfect, but they all sounded so plain. Something that had been written before. I stared across the room for inspiration and found myself looking out of the teal-framed window. It wasn’t much of a view though because the thick branches of a tree filled the frame. The thick bark was bare as it held a part of the morning snowfall on its limbs. It cast a billowing, patterned shadow into the classroom as sun broke through the clouds.

After some contemplation, I jotted down a line on my notebook and tore it out to turn it in. But then the dreaded sentence came from my teacher’s lips as she told the class that we would be reading them aloud.

I froze in fear. There was no time to practice and I couldn’t just mouth the words of the poem. My thoughts swirled as each student spoke their sentence and a roar of claps spread across the room. When it came my turn, I gingerly stood up from the safety of my chair and fell into the spotlight.

My fingers gripped the piece of paper as my heart began to practically beat out of my chest. It’s paced beating a cold reminder of the time that was ticking by as I stood in front of all their cheeky expressions. I glanced over to my teacher and she gave me a soft smile and a quick nod of approval to begin. My lips parted, but no sound emerged. I was frozen with fear as the pressure of the eager eyes around me intensified. I drew in a short breath before I slowly and painfully moved my lips and tongue to form the words I had written down,

“The moon rose slowly like a tree growing in winter.”

I quickly sat back down into the comfort of my seat and held my little hand to my chest as if it would quiet the sound of the rhythmic pounding of my heart. When I finally gathered the courage to look at my teacher, she was standing in awe.

There was not a sound among them, not a single hand clap. I felt ashamed because I knew that it was too different. It was probably wrong and I would have to be put down gently by the teacher, again.

But then, the miracle happened. My teacher ecstatically jumped from her chair and exclaimed, “This is exactly what I’m talking about. That was amazing! I’m…I’m in shock…” She trailed off as she smiled at me with bright eyes glowing in pride.

She began to clap and the rest of my pupils followed as the sound of their hands rustled the silence out of the classroom. I felt a warmth spread across my cheeks as I blushed.

I never had thought it possible that being different could feel so good.

That night, as I lay in my loft bed tracing shapes on the popcorn ceiling, I couldn’t help but wonder if a tree really does grow in winter. Or if the moon really rises or simply appears to as it circles the earth. My finger caught a few loose pieces of the popcorn and they fell onto my blanket.

I picked one up and analyzed all of the rough edges and uneven white paint distribution. I rolled it between my index finger and thumb and imagined it as a little snowflake. A snowflake that fell millions and millions of miles only to be stopped from hitting the ground by my thin little fingers.

I then flicked it to the floor of my room, rolled over, and snuggled into the warmth of my sheets. Before I drifted to sleep, I imagined a forest covered in white snow and in the middle of this forest full of tall yet bare trees, there was a little tree, barely a couple feet tall, flourishing with bright green leaves.

Huh, I guess some of them really do grow in winter.